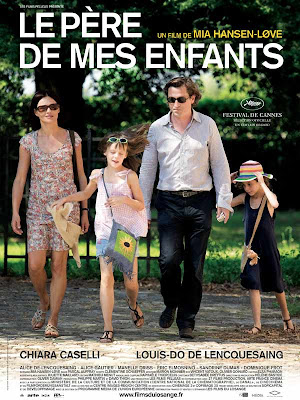 Watching Father of my children (Le père de mes enfants) is like being invited by a family for dinner. Charming children and pleasant parents, you think to yourself. They engage you in a conversation when you come. After a while you start to get seriously hungry but they keep on talking, covering seemingly random moments that fail to engage you. You notice – during awkward pauses – that there are no music playing in the room at all. Then they play music at weird moments – start and stop. Almost too loud sometimes.

Then comes the cucumber slices and some bland yoghurt dip. You think, ah perhaps the food will be good and that main course will be served in a bit. Then the parents start talking again. Before long, you look at your watch and realise that you’ve spent around 2 hours just staring blankly and munching bland cucumber. The family then usher you goobye. You wonder what that was all about …

Well, that was what I felt when I left the cinema. I was so tempted to leave earlier – I saw some who couldn’t stand the pointlessness and left early.

I am all for hanging storylines that get the viewers to think and come to their own conclusion but Father of my child is seriously erratic, pointless and bland. Maybe I’m just the wrong target segment – I read that the movie has actually won a Jury Special Prize in the Un certain regard section from the 2009 Cannes Film Festival.

The movie is about Gregoire Canvel – a film producer who has to face a catastrophic financial failure and decides to kill himself. His wife ends up having to mop his money mess – or at least tries to. The story is pretty much that – along with a red herring storyline about Gregoire’s hidden son from his first marriage. Again, a pointless addition. At least I have learned something – the movie industry is not always glamorous; struggling producers have to deal with growing debt sometimes, and the complexities of demanding directors and actors. It can be a tough gig as well.

So, maybe I have missed the whole plot, that there is a deep and profound existential theme in the movie. I just couldn’t see it unfortunately. The children actresses are really charming and the stars of the movie do perform well with what was given to them. Just poor direction unfortunately.

Maybe I should’ve gorged myself on the cucumber dip and not expected dinner.