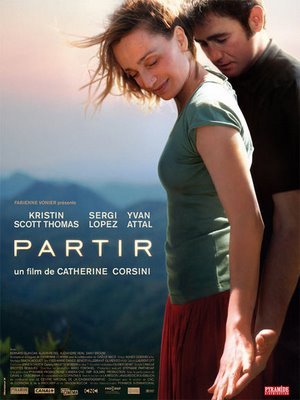 Two people are in bed – one gets up and leaves the room. Then – BANG – you hear a gun-shot.

That’s the first scene that you watch in Catherine Corsini’s Leaving (Partir) – so at least for the rest of the movie you can guess where the story ends up. You can only guess who dies.

I usually pick movies with pleasant storyline or with real human emotion elements in it. I approached Leaving with apprehension because of the anticipated tension and problems. The reason why I went ahead and selected this movie is purely especially because of Kristin Scott Thomas – as well as for Sergei López. I adore Kristin Scott Thomas’ movies as she can inhabit the characters that she plays really well.

The story is about Suzanne (Kristin Scott Thomas), a housewife trapped in the mundanity of daily life, raising two relatively well-behaved children, and married to Samuel, a well-known and well-connected doctor in Nîmes. When Suzanne ends up having an affair with Ivan (Sergei López), the builder that they hire to prepare Suzanne’s office – all hell breaks loose. She’s head over heel in love (or perhaps lust?) with him. Samuel, the devoted husband, does not cease to try to win her back, by blocking the access to her accounts, and closing nearly all avenues to get her as well as Ivan employed in the city.

Kristin Scott Thomas shines as usual – and the more I see her in French movie, the more I find it peculiar when she starts speaking English again. 🙂 Sergei López also sizzles as the object of affection – masculine but yet vulnerable. You can say that it’s the modern French version of Lady Chatterley’s Lover with a tragic consequence. Yvan Attal, as Samuel, is convincing as well as the jilted husband who can’t see past the greyness of their life and rescue Suzanne out of her boredom. Suzanne thought that she was content before she met Ivan and then she realised how monotone it was … That got me thinking, wouldn’t it have been better if Suzanne did not know how unhappy she was? She thought she was doing okay – her affair only uncovered the things that she didn’t have with her husband: passion, excitement, and a sense of ‘rawness’ (you probably get sick of living a polished life for twenty years!).

Leaving is a tight movie – it makes you think about marriage and relationship: there are so much more needed in a marriage to get it work other than devotions. On the other hand, it takes a lot more than love for a relationship to survive.