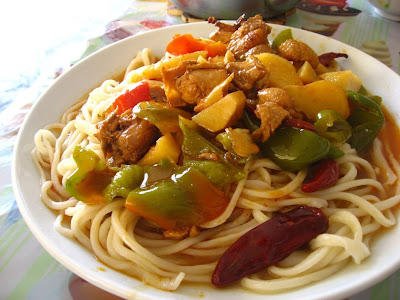 Every week after our cellgroup meeting, we always spend a considerable amount of time debating where we should go for dinner. We’re getting really sick with the restaurants in Chinatown – from Ky Chow, Ding Hao, Ken’s, Dumpling King to Ajisen Ramen – most of them evoke loud groans from the group now. On principle, I refuse to eat in Barbeque City because of how rude the waiters and the waitresses there. Not only they don’t smile easily, they always serve us grumpily when we request for additional things – such as a fork, a spoon, or a little plate of fresh cut chillies. We stumbled upon a Chinese restaurant in Magill called New Dynasty a couple of months ago and we have since then had numerous dinners over there. However, after a while, we’re getting bored again and we want to try something different – tasty food served in sizeable portion, and cheap! Haha. Well, I hang around students so I have to ensure that they can afford the food! 😛

Tonight we nearly had dinner at Ken’s, but I wasn’t that keen on going there so I suggested the Uyghur restaurant across the road from Chinatown. A lot of the folks in the group didn’t know what Uyghur food was – I vaguely told them that it was Chinese food that came from the western part of China – the muslim part. Some of the Indonesian youth jokingly complained that they wouldn’t be able to order pork and that they weren’t game enough to try something different. Some of the guys were enticed by a group of girls sitting around the table closest to the glass window. Well, they were beautiful! They looked Chinese with some western feature – ruddy complexion, sharp nose, porcelain skin. I suppose it’s because the Uyghurs are from the Xinjiang Province in China, that’s bordering Russia, Kyrghizstan, Kazakhstan and Afghanistan.

Unfortunately they ran out of Polo – my favourite Uyghur dish. There used to be a Uyghur kiosk in the food court in Chinatown many years ago and I decided to give it a go. I was hooked on Polo – their version of fried rice that’s made of rice, carrot, mutton and sultana. Yes, it sounds a bit weird but trust me, it’s delicious! The kiosk closed down a couple of years ago, unfortunately so I couldn’t get Polo any longer. So, I was very excited to find a Uyghur restaurant near Chinatown. So because Polo was sold out, I decided to try Laghman which was apparently similar to pasta – handmade noodle with vegetable, meat and sauce on top. It was delicious too, and it just looked like spaghetti! We also ordered some kebabs which were also very delicious, especially the lamb kebabs. Most of my friends enjoyed the food, except for a girl in my group who reportedly can’t eat any spicy food at all. She had a spoonfull of what she ordered and refused to eat anymore. 🙄 Admittedly the beef dumplings that she also ordered tasted a bit … erm … different. The restaurant put some herbs or greens in the dumplings that I couldn’t quite name. Nice but … different.

Talking about Laghman, apparently Marco Polo had this when he travelled to China through the Silk Road. I’ve always heard about Marco Polo introducing pasta to the Italians after his trip to the Far East but I didn’t know that it was specifically the Laghman that he introduced to the west. So, after numerous Spag-Bol (the Australian shortened version of Spaghetti Bolognaise), I have now tasted the grandaddy of all Spag-Bol, the Laghman! (the Laghman that I had didn’t quite look like the one pictured, because mine had minced meat in it and the vegetables were cut finer).

I hope I can get a plateful of Polo the next time I go there! 🙂