It’s past midnight here in Vienna and I have just finished my bath. Having a bath feels so luxurious because I don’t have a bathtub in my bathroom in Adelaide; besides you feel guilty as well having a bath in Australia, because of the drought and the water shortage over there.

My second day was also enjoyable – I started by getting up earlier in the morning because I’m joining the half-day tour that is part of the “Wien erwartet Sie” (Vienna waits for you) package that I took. The package basically includes a cheaper rate for the two-night accommodation, a free ticket to Albertina (a historic place near the Hofburg Complex that houses some fine art collections as well as art exhibitions), a free sacher torte and coffee at Cafe Schwarzenberg, and the half-day city tour. It also provides free access to the public transport for 72 hours.

The bus picked me and a couple of other guests from the hotel and dropped us at the Südbahnhof Railway Station. There were a lot of bus that also picked tour passengers from all over the city. All of us were then split into tour language groups: English, French, Spanish, and so forth, and moved to a new bus. We then slowly made our way around the city, along the Ringstrasse that circled Vienna. The road was built under the instruction from Emperor Franz Joseph I in 1857 – we passed the many city landmarks. There were some that I already visited yesterday but there were many more that I wanted to visit, so I made some mental notes along the way.

We then moved on to the Schönbrunn Palace, which is the highlight of the tour. The palace was Empress Maria Theresa’s summer residence in the 1700s. If you ever come to Vienna and want to visit the Palace, I think it’s much better to join a guided tour, like the tour that I joined. When we arrived at the Palace, there was a looooong queue in front of the entrance for individual travellers. We didn’t have to queue at all and could get in, as long as we stayed close to the guide. We weren’t allowed to take pictures, nor to bring in our backpacks and every room in the Palace that we could visit was jampacked with tourists. Whilst the palace was impressive, the experience wasn’t. A visit to Schönbrunn Palace isn’t recommended for you if you are claustrophobic and you intend to visit during high season. I asked the guide whether it was always this busy – she said that it was much busier in May. Whoa! So we were ushered in from one room to the next, learning about some tidbits about the Habsburgs, whilst bumping and squeezing with tourists from all over the world. 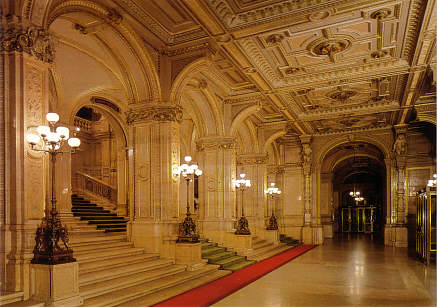 The tour finished at 12.15 – we were then driven back to Südbahnhof Station, where we could take the shuttle bus back to the city. The guide mentioned that we could join an hourly tour of the Wiener Statsoper, so I quickly made my way there and joined the guided tour at 1.00pm. It was an interesting tour of one of the world’s famous opera theatres. You get to sit in the centre box, visit the intermission areas, and even go to the side of the stage! The tickets are apparently pretty cheap as well when they are in season (Sep-Jun) because 50% of the funding is state-subsidised.

I was all toured-out after I finished the second guided tour, and I was getting hungry. I noticed that there was a hotdog seller nearby, so I ended up having some currywurst mit brot for lunch with some apple juice spritz for drinks. Yumm, yummm. At least it wasn’t McDonald’s! Haha. Because I had the free voucher to visit the Albertina, and because it was having the Paul Klee exhibition until the end of August, I decided to have a look. I was introduced to Paul Klee when I bought an Ikea print of one of Paul Klee’s works, when I was still living in Singapore. I didn’t know who he was – my flatmate noticed it when he shared the flat with me and told me that it was Paul Klee’s. Some of Paul Klee’s famous works were painted in colourful geomatric patterns which suited my taste a lot. I had a quick look at the Paul Klee’s exhibition and learnt about his life stories, and how his paintings were considered “degenerate art” by the Nazi. He died feeling lonely and a bit bitter, according to the commentary that I heard on the audio tour. It gave me an insight to his life which certainly has added to my appreciation of his works. I couldn’t find a good poster of his work that I like, so I didn’t buy any posters at the shop. I’ll try the art shop tomorrow!

After Albertina, I walked to the Josefplatz. My destination? Augustinerkirche. My guidebook mentions that it contains several hearts of the Habsburg rulers which certainly pricked my curiosity. I couldn’t see the urns, so I took some pictures of the church interior – especially the impressive tomb. I noticed that my camera battery was flashing because in my stupidity, I didn’t charge it enough this morning. I did manage some good snapshots – I quickly walked out and then I thought maybe I could do another detour to the Prunksaal within the National Bibliothek in Vienna. The Prunksaal houses 200,000 ancient books that are certainly out of bound to readers and visitors. You can take pictures, but without any flash. It was after a couple of shots that my camera decided to die. So, rather than continuing my trip without any camera, I headed back to the hotel instead and charged my camera for a couple of hours.

At seven o’clock, I headed back to town – my destination this time was the Cafe Schwarzenberg so I can redeem the sacher torte + coffee voucher. I thought I wouldn’t want to be a cheapskate who just went there for a freebie, so I had dinner there as well – what else but the ubiquitous wienerschnitzel with potatoes. This time, whilst the waiter still served without any warmth, he did acknowledge my feeble attempt to practice my rusty Deutsch. He wasn’t patronising nor condescending – and when I produced the voucher, he just took it and gave me my sacher torte and melange (melange is coffee with foamy milk – and I couldn’t see any Vienna Coffee on the menu! *grin*). So, I wouldn’t hesitate to give this café a wee promotion on my blog. Haha.

It was getting dark by the time that I finished my meal but the light was still good for some photography, so I walked around past the Russian Liberation Monument, Karlskirche, as well as to the sights that I saw earlier during the city tour. I took some photos of the statues of Goethe, Mozart, and some more shots of the Statsoper and many other photogenic buildings around Vienna. As it was getting late, I headed back to the hotel via Stephansplatz and then decided to take a bath … Now that my blog has come full circle, I can go to bed and sleep. At least, try to. Vienna has been balmy for the past two nights and there’s no aircon in the room – not even a fan. Argh. 😡 I have to open the window a bit to let the breeze in – unfortunately I can’t open it too wide or else I will sleep with numerous moths and insects. Thankfully I’m not that sensitive with road noises as I go to bed …

Tomorrow, I will get up early again so I can get a couple of hours in the city, before I check out and catch the tram to Salzburg! Mozart’s birthplace and the city of the Sound of Music!