I read Mitch Albom’s book some years ago when it came out – I enjoyed his ‘Tuesdays with Morrie‘ a lot that I quickly bought ‘Five People You Meet in Heaven‘ when it first came out. I came across the DVD when I went to Borders last week – it was on sale, so I bought it because I was curious how it would stack up to the book. 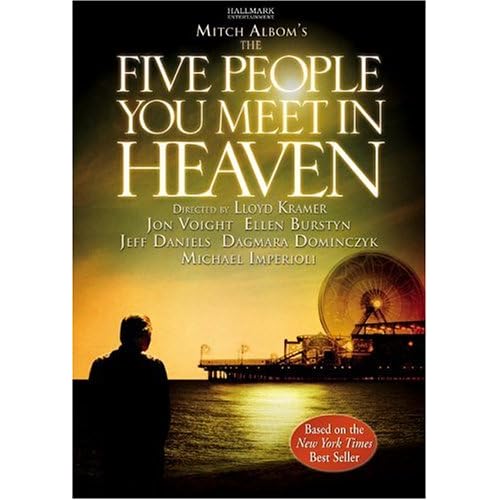 Apparently the movie was made for the Hallmark channel and not for the theatre, so the format and the editing kinda reflect that as the movie fades in and out from time to time, just to allow the TV station to enter the ads, I suppose. The film is very touching and stays pretty much true to the book, because Mitch Albom himself adapted the screenplay for the movie.

Jon Voight plays Eddie really well and the actress who plays Marguerite is so charming, I really wouldn’t mind at all finding somebody who is just like her. 🙂 The movie and the book tell a very important story that in so many ways – trivial or significant – our life impacts somebody else’s. Not one life is meaningless, as we enrich each other in the only way that we can.

If you come across the DVD, it’s certainly worth a purchase. I remember a quote from Ellen Burstyn’s character, Ruby who said that we thought by hating we would hurt the other person. We forgot that hate is a curved blade – that it would hurt us more than it would the other person … How true.