It’s the first day of the financial year – I’m not all that fussed to tell you the truth. I’m not even an accountant to be excited by the new financial year – it’s just a sense of a milestone passed, another step taken, another page open, you know the routine. 🙂 It’s a sunny cool day in Adelaide – it’s so nice to feel the sunlight through the blinds in my study … it’s not that cold either – apparently it’s about 15C-16C at the moment.

The weekend’s pretty relaxing so far – yesterday I had my prayer meeting in the morning at Pa’ Toming’s house along with the other workers from church. Afterwards, despite my plea that we should all go to Ikea for lunch (so I could check the items that are on sale … hehehe. 🙂 ), we ended up going to the Penang Hawkers Corner at Renaissance Arcade – my usual lunch spot, since it’s only a stone’s throw away from the office. After lunch, I had a walk around in Rundle Mall – I was very tempted to buy some DVDs or books because it seemed like everything was on sale. I did buy a book at the end, in Myer, a book by David Crystal called By Hook or by Crook: A Journey in Search of English. I have always been fascinated by accents and the origins of words, phrases and idioms. I couldn’t resist it so I bought the book – besides, it was 40% off. Hehe. 😛 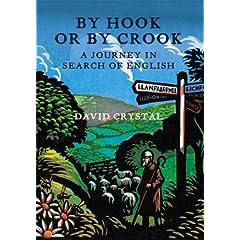 I have finished the foreword and the first chapter so far – it is a very interesting read. He visited several villages and towns in Wales, England and Scotland to see the variation of accents and the origin of words and idioms. It’s really my kind of book! 🙂

Paul and Terry also came over later on yesterday, and asked me towards the end whether I wanted to have dinner with them but I wasn’t all that hungry and besides I was rather broke as well. Haha. So I declined and had some rows of the Whittakers chocolate that I bought on Friday evening. I have just finished the bar of chocolate just now, and boy, it is very yummy! I bought the 250g Hazelnut milk chocolate bar because I was attracted by the cover – it has a picture of a block of chocolate filled with chunks of hazelnuts. Don’t you hate it, when you bought something and at the end the content is actually quite different to what is portrayed on the packaging? Well, it’s not the case with Whittakers’ chocolate! The block is a bit ruggedly shaped because there are protruding hazelnut chunks everywhere. You can’t really break a row off the block cleanly because of the chunks. The chocolate is droolicious. I think I may just get it again the next time I shop, especially if it is on sale.

Well, back to what I did today, after church (we had an early service at 9.30am at the Ascot Park Uniting Church) because we had a combined service with the English congregation. We also had a youth choir from Lilydale in Victoria so the church hall was really packed. It was a good service – Ascot Park Uniting Church felt like a “GKI+” – they prefer hymns and old-style songs, but eager to refresh and renew themselves. I do enjoy both ends of the spectrum – the hullaballoo of charismatic worship, as well as the solemn and somber hymns. I do miss the majestic feeling of the congregation singing hymns together, harmonising the tunes voluntarily, which was just grand. I used to experience that when I went to Enfield Baptist Church, that was near Hampstead Centre, the International Students Residence that I used to live in when I was a student in UniSA, from 1992-1995, on and off. My favourite hymn is Wesley’s “And Can It Be“. Ahhhh, such a wonderful memory!

After service and fellowship (over sandwich, scones, cakes), I went home via K-Mart – the rest of the Indonesian folks went to VT for some Vietnamese lunch, but I didn’t feel like it, so I asked Gideon for a ride and to drop me at K-Mart instead. I ended up buying a replacement lavender plant for the front of the house (the one that I had there died already), a pot that was on sale, and a deep-root pot watering cone-thingiewotsit. I walked home in the sunshine, repotted the lavender in front of the house and chucked out the dead plant (RIP), and then installed the deep-root watering cone into my Devil’s Ivy plant in the living room, and into the Ficus tree at the porch. I also repotted my Ctenanthe in the living room into a bigger pot, divided the sad-looking Spathiphyllum (Peace Lily) in my laundry room into two plants because I thought the plant needed dividing. My judgment was proven correct because when I took out the plant, the roots already filled the pot – no wonder the plant was languishing. So now I have two Peace Lily plants now – hopefully both will survive!

Well, that is it — I am going to enjoy the afternoon sunlight — the day is slowly getting longer, by minutes – and before long, I will enjoy the afternoon hours again and the bright evenings when I can do my gardening or just lazing around in the hammock.